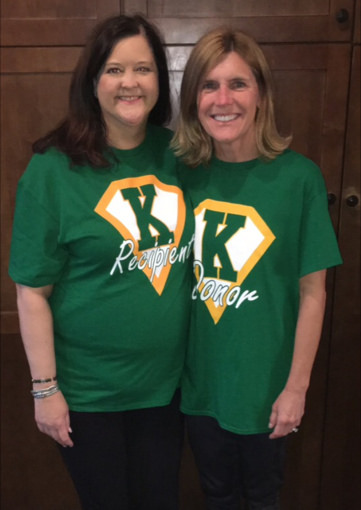 “I believe in the human touch, which cultivates sympathy with my fellow men and mutual helpfulness and brings happiness for all.”

Auburn alumnae Martha Dazzio ’93 and Susannah Cleveland ’93 understand that line in the creed more than most. The two were roommates at Auburn and they formed a friendship rooted in love. Although years have passed and the two live in separate cities, the bond that formed while on the Plains now runs deeper than ever.

This past January, Dazzio embraced the power of the human touch and became a living organ donor when she donated one of her kidneys to Cleveland in a successful transplant at the University of Alabama at Birmingham Hospital. Dazzio’s selfless act is one of countless examples of the love that runs through the Auburn Family.

It all started back when they were still students at Auburn.

Cleveland was first diagnosed with polycystic kidney disease, a genetic disease, when she was 22 years old. She was in her last year of college and still lived with Dazzio.

“It progressed through the years and never really gave me too much trouble until the last two years where I started getting into end-stage renal failure. At that point, only 20 percent of my kidney was functioning,” Cleveland said.

After the additional diagnosis and appointments at Piedmont and Emory hospitals in Atlanta, Cleveland was placed on Georgia’s donor list in the final stages of kidney failure. All of her family members were deemed negative matches, and Cleveland prepared to be put on dialysis as she waited for a kidney.

When Dazzio heard Cleveland’s disease had progressed, she knew she was meant to donate one of her own. They decided to try to get accepted into UAB’s donor program so Dazzio would be closer to home if her kidney was indeed a match.

“I had zero restraints. I just knew I was going to be a match. There was no doubt in my mind,” Dazzio said.

After months of waiting to be accepted at UAB, Cleveland was officially placed on the Alabama donor list. Dazzio then went through a series of interviews and physical tests to ensure her kidney was compatible.

“The Monday after Thanksgiving, I got the call that we were a perfect match. Every blood and tissue test came back as an exact match,” Dazzio said. “We were as close as blood relatives.”

The two went into surgery on Jan. 5. Since then, both women have fully recovered. However, Cleveland will be on medicine for the rest of her life to ensure she continues to accept the new kidney.

“It usually takes up to six weeks for a recipient’s new kidney to begin working. Mine started working for her before she got out of surgery,” Dazzio said.

The night before the surgery, their other college roommates and close Auburn friends came to the hospital to encourage them and give their love. Dazzio said the night was spent telling stories and reflecting on their time at Auburn.

While at Auburn, the two women were in the same sorority, members of the Student Government Association and served as War Eagle Girls for the Office of the President.

Dazzio said she was also grateful for the support they received from Auburn through the whole process.

“My son is a freshman at Auburn and his fraternity prayed for us throughout the whole process. Also, our sorority’s current chapter sent us an encouraging video sending us their love and prayers,” Dazzio said. “It was so incredible to be surrounded by a love like that. The Auburn Family always comes through.”

Cleveland is still active on campus, participating in War Eagle Girls and Plainsmen events and interviews several times a year.

“Auburn is truly my heart. I love being able to visit with current students and see the ways that the university has grown and changed over the years,” Cleveland said. “Some of my best years were spent at Auburn, and I am so thankful for it.”

Dazzio and Cleveland encourage each member of the Auburn Family to be tested as a possible kidney donor. Cleveland said the best resource for information about donating is on the website of transplant hospitals.

“There are over 3,000 people on the waiting list in need of a kidney in Alabama. My long-term goal is to find a way to connect Auburn alumni and students together and help alleviate the problem close to home,” Dazzio said. “I had such an amazing experience with it and I hope people will consider giving to others in this way.”

Cleveland said she could not thank Auburn enough for her experiences and friendships formed while at school.

“The Auburn Family is everything to me,” Cleveland said. “It brought me Martha. She has definitely blessed me as a friend. I am humbled by her selflessness to not even question doing this. She saved my life and I don’t think I can ever thank her enough.”

Christy Brown is a senior majoring in public relations with a minor in Spanish. She has a passion for visual storytelling and experience with creating a digital presence for clients’ brands. During her time interning with CMT/Viacom Networks and Auburn’s Office of Communications and Marketing she has grown to understand the importance of integrated marketing, allowing for effective communication with key stakeholders and ensuring clients’ return on investment. Beyond her job experience, Christy served as the director of public relations for Auburn’s University Program Council where she managed a social media presence for all events as well as oversaw hospitality and communication with 20 visiting artists. Her favorite social media platform is Snapchat due to its quick, visual storytelling, its growing popularity and her guilty pleasure of Snapchat filters and bee voice over videos.